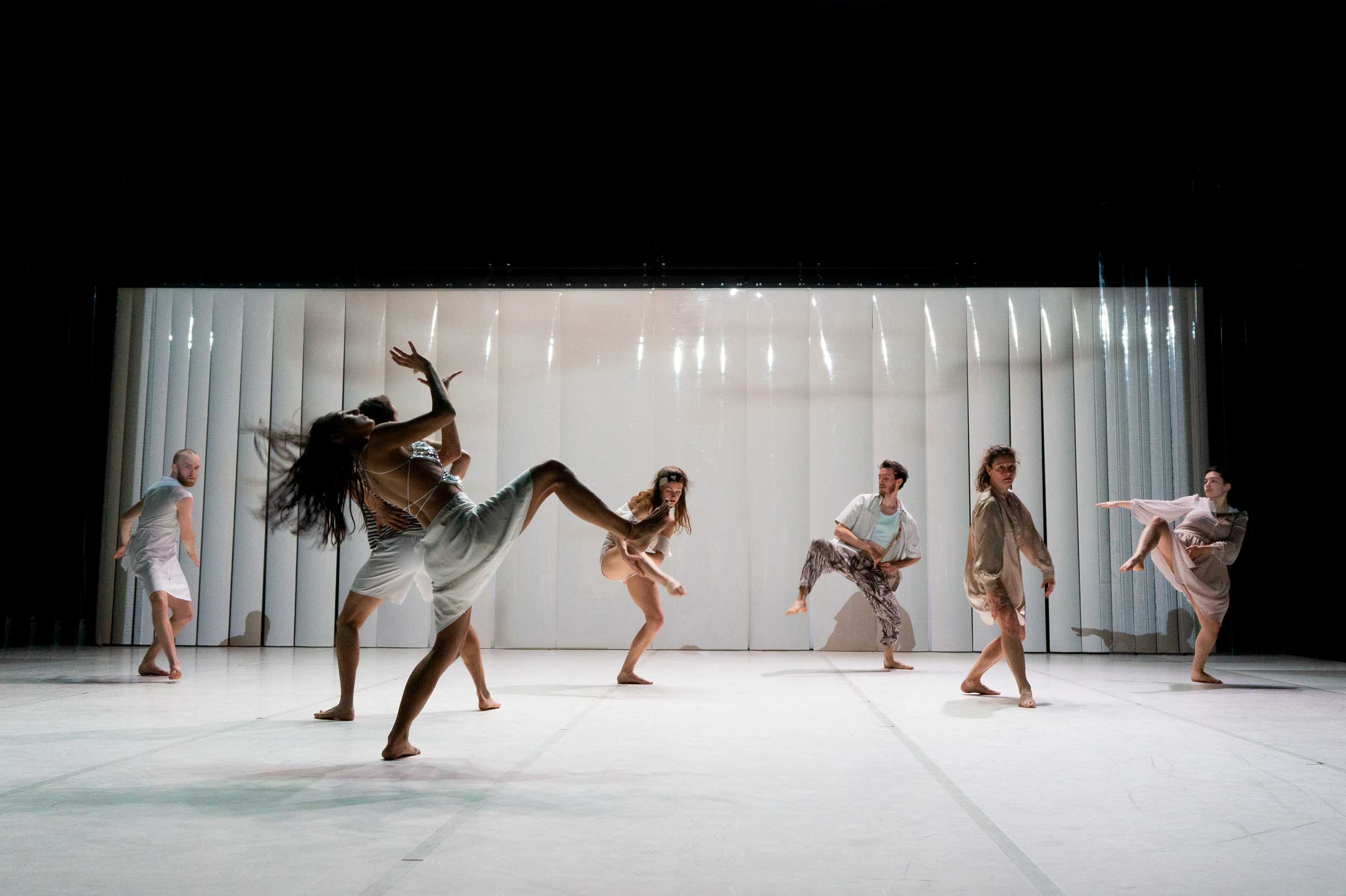 Another canceled festival, reduced to heartache. Christian Ubl was due to present The Fifth Season, his most important creation these days at the MAC. He presented this great spectacle to a handful of lucky professionals.

Fiesta
It starts strong, it hits hard. A DJ throws muffled techno as if you were outside the club. They arrive and heat the room up, asking us to wear a mask, but not the one you think! They are dressed as if they had robbed a thrift store. They are ultra mismatched and ultra singular at the same time. After having filmed us with our total agreement and projected our image on a video-decor wall, the dance takes place. It gesticulates, it waves, it hits, it smirks, it’s sexy.

They each dance for themselves but find themselves in explosions with oriental or Brazilian hips, always to the rhythm of techno but no longer muffled at all.

In the colors and in the footsteps we find the fresh universes of Bagouet and Larrieu, also for humor, because these very physical performers and very masters of their gestures make us laugh a lot. However, Ubl’s dance is not frozen in a nostalgia 80. Her dance is vibrant, embodied and communicative. She combines classical contemporary writing (solo, group) with performance (link with the audience).

It could have stayed that way, been a party, just a party, which is an act of resistance right now, but that’s not what the artist associated with the Briqueterie wanted to do.

Danse macabre, dance of light
The performers, Céline Debysère, Marion Peuta, Martin Mauriès, Bastien Lefèvre, Francesca Ziviani, Baptiste Ménard, Yoann Hourcade, the dancer and singer Mathieu Jedrazak and the Dj Romain Constant, take us around by the nose in an atmosphere that is ultimately baroque . For its creation, Ubl was inspired by a painting by Pieter Brueghel the Elder, The Battle between Carnival and Lent. If you look at it you will see both joy and chaos in it. Life and death, freedom and coercion. In short, our life today.

This translates into a change of course both in the lights and in the costumes. Yet the dance is no different, it changes tempo and intention. What was festive is sad, techno gives way to classical music.

Ubl does not choose between the formal contemporary and the lyrical contemporary. We want to capture every moment, including an inhabited and ultra speed solo in chiaroscuro that releases all the muscles or this line of golden bodies as blessed, later.

When you get out of there, the sensation is that of having closed a book. The fifth season is a hugely constructed show with crystal-clear writing and will. It is an ode to the living that is not at all awkward. And in her theatricality, Pina Bausch is not far from thinking that Ubl needs to make these artists dance because their life depends on it, there is only one step (and also a few shoulders that off center, a few reversals, a few races …)