The show – or the performance – lasts 50 minutes, ten of which are devoted to the unfolding of a red thread in a long arachnéen network, maintained by fine pulleys, forming a real installation on stage. During this time, a body whose only back is seen moves crawling laterally, then rolling on itself, always pivoting around the same axis. Gradually, this body will be on all fours, then standing, reminding in his attitude the man walking filmed by Etienne-Jules Marey at the beginning of cinema. Meanwhile, video images of male nude bodies, textured skin and parchment, are projected on the wall of the distance. In counterpoint, the presence of the dancer, dense and tangible, is essential to make this plastic device alive. The rhythm of this presence suddenly accelerates, sketching the hypnotic choreography of Lucinda Childs in Dance (created in 1979 on the music of Philip Glass), on electronic music and in a luminous intensity that becomes blinding.
Dressed, wearing sneakers, the dancer continues his race and stops abruptly, while the video image shows a reel body that unrolls quickly a red thread. The attention of the spectator, a little stunned, is then again attracted by the red thread that rewinds, thus returning to the starting point of the performance. The dancer left the stage, leaving the spectator puzzled at the comatose sensation that was his for the duration of this very contemporary creation, signed by four young artists.
Delphine Goater – February 2007 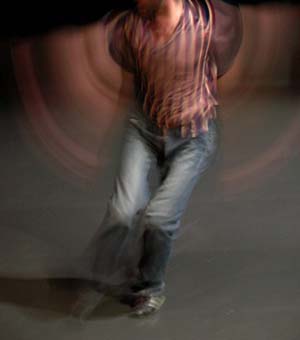