It also dances in Avignon!

At the CDC, the pieces are linked every 2 hours in a lively and invigorating rhythm. Accompanied by Seb Martel (at the cythare), Kylie Walters and Christian Ubl open the day with AU and offer a lesson in originality, mixing with their third landscape and their dynamic steps a sweet and crazy fantasy wander around the notion of identity (she is Australian, he is Austrian). All three are funny, precise and fine; the textual variation around the Au / o amuses, too, but convinces less.
In co-production with the Doms, the touching Claudio Bernardo wrote in Só20 a sensitive and sincere score around his story, necessarily linking private and artistic life. The Brazilian choreographer returns to his dance path, with a palpable nostalgia for passing time, 20 years of passions and collaborations, and gives himself whole to make shine the flame that still animates. A magnificent palimpsest of gestures and memories that he gives, generous, in beautiful intimacy.
Boys do not cry from Divergence Co. is a thunder! Sounds (drums balloons, earplugs recommended), chopsticks (which flutter in all directions), body (very virile performance of Sylvain Huc and Pierre-Michaël Faure). A testosterone fight where the two “roosters”, still on the starting blocks to measure themselves, avoid caricature, saved by the talk about gender … Sweat, energy -ver brutality is also the question asked about masculinity – and finally the thunder of applause for a very sonorous creation that lacks just a bit of grace for the fragility of men who cry …
Grace, A woman in the sun Perrine Valli (in partnership with the Swiss Selection in Avignon) is overflowing! (Very good) Inspired by Edward Hopper’s painting, the choreographer creates a step of four around desire, a contagious sensuality. Wonderful and languorous preliminaries lived in slow motion by two couples in a state of weightlessness, with a masterly gestural precision, who curl up with pleasure, languid, mesmerizing, in perfect symbiosis. The fascinating eulogy of slowness and the 7th heaven! 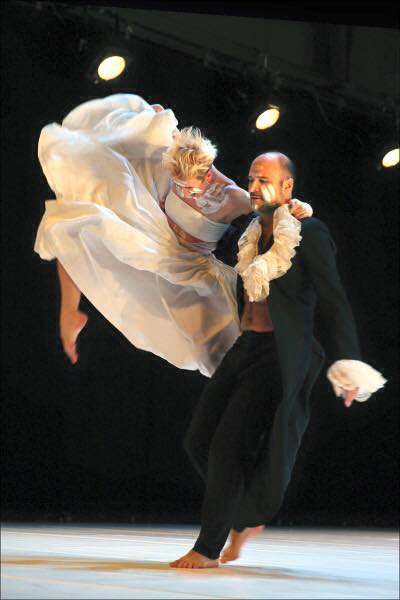