Christian Ubl creates a hybrid scenic object from Fabrice Melquiot’s text, La Semeuse, which he adapts with a good dose of humor and a real sense of lightness. A judicious combination of theater and dance as an echo of the expressive dimensions present in the short story by the formal alternation of two typographies … that can be deciphered in real time on a background screen. The fable is simple: it is a story of love in the twentieth century. She and He separated. Through it we travel and recompose the puzzle of their love; through the poems he wrote to her we understand the meaning of the loss of the other. It is a play on the desire and the hurt to be hurt: “no I do not lie, I sow,” she says! In turn Christian Ubl can indulge in sowing the words of Melquiot according to his fantasy (grotesque assumed word of Ti amo exaggeratedly seventies), his taste of derision (caricature of machismo in the guise of Pablo in combination tight red and lascivious swaying) and his listening to body language that never illustrates the word. To Elle, perfectly incarnated by the actress Céline Romand, the theatrical expression; to Him, to whom Christian Ubl lends all faces, dancing. The song and the video creation come to be mingled too, the spectacle reserves pretty moments of grace and fragile balance in spite of some lengths; the news becomes a scenario and Christian Ubl offers a vision in cinemascope.
The Semeuse was created on April 15 and 16 at 3bisf in Aix-en-Provence 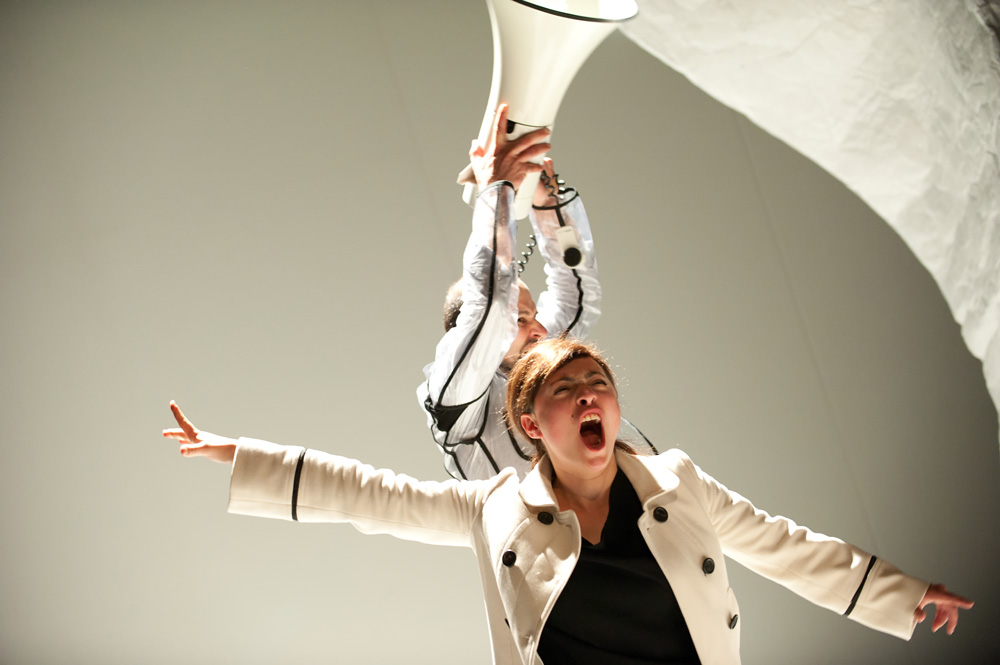