Inside Cairo’s Sednaoui department store, DCAF’s How Much? is to explore dialogue between gestures in trade and art

This Wednesday, the Sednaoui department store in downtown Cairo is to host How Much? , a contemporary dance performance to explore dialogue between gestures in trade and art. 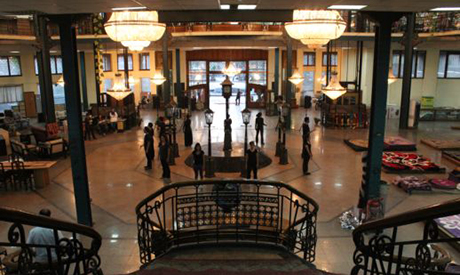 Choreographed by Christian Ubl from France’s CUBe association, directed by Karima Mansour and performed by the students of the Cairo Contemporary Dance Centre, How Much? is to raise questions on social and cultural heritage and memory, according to the event’s press release.

Produced by Nassim El Raqs, a contemporary dance festival in Alexandria, the performance is to feature music by Khaled Kaddal, on the electric guitar, and Zakaria El Eskandarani, on the nay flute.

It is to be held at the Sednaoui department store, as part of the DCAF festival’s Urban Visions programme of contemporary art interventions in public spaces.

Built in 1913 on the site of Nubar Pasha Street in Al Khazendar Square in Attaba, downtown Cairo, the department store still retains many of its original features, including old chandeliers and a spiral staircase.